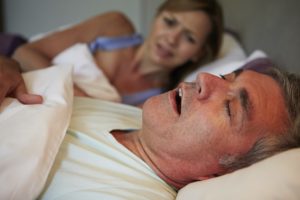 Obstructive sleep apnea (OSA) has been linked to several health conditions, including diabetes, high blood pressure and heart failure. Now, a recent study has found that the sleep disorder may be linked to dementia. West Orange dentist and sleep apnea specialist Dr. Ivan Stein discusses the study’s findings in this blog post.

What the Study Found

The study, published in the European Respiratory Journal, looked at 83 older adults, between the ages of 51 and 88 who were considered “at risk” for dementia. None had been previously diagnosed with obstructive sleep apnea. All participants were tested on memory ability and evaluated for depression symptoms, both of which are common symptoms of sleep apnea. They also had MRI brain scans taken and were connected to a polysomnography machine overnight that tested for OSA symptoms. The MRI scans were used to measure different parts of the brain while the polysomnograph results were used to evaluate the changes in brain activity, blood oxygen, breathing and heart rate during sleep.

Researchers found that patients who had low levels of blood oxygen while sleeping had reduced thickness in the left and right lobes of the brain. Both are regions that are important in memory ability and known to be affected by dementia.

The study also found that patients with signs of obstructive sleep apnea were more likely to have increased thickness in other regions of the brain. Researchers believe this could be signs of the brain reacting to lower levels of oxygen with swelling and inflammation.

“Our results suggest that we should be screening for OSA in older people,” said Sharon L. Naismith, senior study author and professor at the School of Psychology at the University of Sydney in Australia. “There is no cure for dementia so early intervention is key. On the other hand, we do have an effective treatment for OSA. This research shows that diagnosing and treating OSA could be an opportunity to prevent cognitive decline before it’s too late.”

If you are having symptoms of sleep apnea, including problems with memory and cognitive function, we encourage you to schedule a personal consultation with our sleep apnea specialist, Dr. Ivan Stein. Please contact New Jersey Sleep Apnea Solutions by calling (855) 949-7667 or emailing our office today.