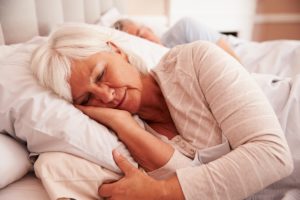 Sleep apnea is a sleep disorder in which a person’s breathing is disrupted, stopping and starting repeatedly during sleep.

Sleep apnea primarily affects middle-aged and older people, and new research from the Mayo Clinic reveals that sleep apnea may be linked to a higher risk for Alzheimer’s disease.

Below, the team at New Jersey Sleep Apnea Solutions shares the study’s details.

The “apnea” in sleep apnea refers to the pausing that occurs in a person’s breathing, and researchers found that frequent apneas may contribute to the accumulation of higher concentrations of a protein called tau in a person’s brain.

Tau is found in the neurons of the central nervous system. Its purpose is to stabilize microtubules. However, too much tau in a person’s brain has been associated with cognitive impairment and may lead to Alzheimer’s disease. Tau build-up in the entorhinal cortex (ERC) — the region of the brain that deals with memory and visual perception — is especially concerning.

In the Mayo Clinic study, a group of adults with no cognitive impairments aged 65 or older were assessed based on a questionnaire completed by their bed partners. The questionnaire asked the bed partners whether they had witnessed the study participants experiencing apneas.

Fifteen percent of participants were identified as having apneas while sleeping. Using Tau-PET and Amyloid-PET scans, those apneas showed a strong link with tau accumulation in the ERC of participants’ brains.

The study controlled for the following factors:

Other research also shows a link between sleep apnea and Alzheimer’s disease.

A previous study found that people with severe sleep apnea had higher levels of beta-amyloid, which is a piece of a protein called amyloid precursor protein (APP) and is associated with Alzheimer’s disease.

Additional research is still needed, but if you have sleep apnea or if you suspect you might have it, you should consult with a doctor right away so you can get treatment.

To speak with a sleep apnea specialist, call or email the team at New Jersey Sleep Apnea solutions today to set up an appointment.